Omega is one of the leading Swiss watch brands in the world. It is a subsidiary of Swatch Group, the largest watch company in the world. The first Omega products were offered in 1848 (though the actual Omega brand was born later), and the company quickly conquered a large part of the market.
Omega watches have been used by a large number of renowned companies and associations, such as the Royal Flying Corps of Britain, NASA (for lunar missions), and the Olympics (as official timekeepers). But that’s not all: Omega watches were also featured in several James Bond films, and worn by the titular protagonist. In this article, we will learn about Omega luxury watches, see the ranking of the best models, peruse the catalog of the best models, observe price trends, hear the opinions on various models, but above all provide information on the purchase of new and second-hand watches. Curious? Let’s begin.

Omega models are the pinnacle of luxury watches. Precision, reliability, versatility, and beautiful design are just some of the reasons why Omega watches have collaborated with names like NASA and the world’s favorite secret agent, James Bond . Innovation is at the heart of Omega. Thanks to its specialist expertise, Omega has helped shape and revolutionize the watch industry by building its reputation as one of the largest luxury watchmaking brands in the modern world. All this is also reflected in the price of the timepieces of the various collections, which clearly varies according to characteristics such as the materials used, the sophistication of the complications, and the number of models available on the market. The question then arises: “But how much does an Omega watch cost? ” The cheapest models, such as the Omega Seamaster 300, are around $ 1,500; the most expensive models have prices ranging from $ 60,000 upwards, including limited editions such as the Omega De Ville Tourbillon Co-Axial or the Omega Seamaster Planet Ocean 600m Liquidmetal.

For over 160 years, Omega has gone further than any other competitor, and with time became one of the most famous watch brands in the world. This Swiss company has achieved many great successes; certainly the most remarkable of all is the fact that it was the first – and only, for now – watch on the Moon, in 1969. Omega was not just the first to climb so high in the sky, but it was also the first watch to descend into the depths of the sea, in 1932. All this has led the company to create a very extensive and varied catalog of watches.

Omega is, therefore, a brand that covers every possible field and situation imaginable. Let’s see, in detail, what Omega offers in its catalog: 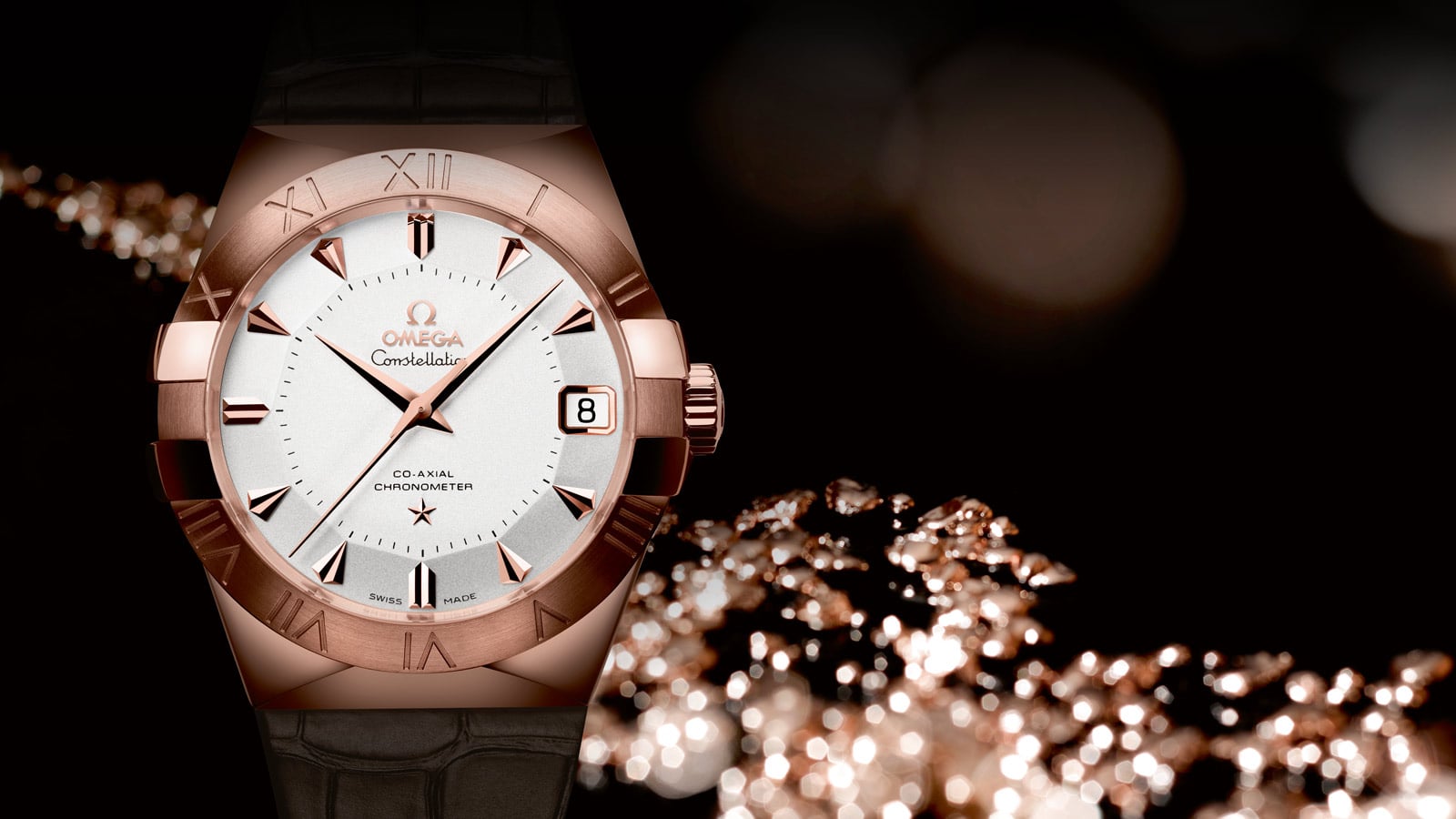 Among the collections celebrating the brand’s anniversary (it celebrate its 65th birthday in 2017) we find Omega Constellation . It is a collection much appreciated by Omega fans, both for its vintage and its modern models, which are made for both men and women.
The Constellation collection was founded in 1952, and initially featured “pie-pan” dials. More recent models were instead developed using quartz movements for the first time; they are relatively thin, have integrated bracelets, and use four claws on the bezel to fix the crystal. 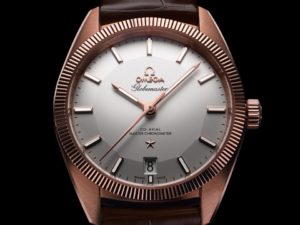 In this collection we find a model that intrigues: the Globemaster . This watch, according to Omega, contains the most technologically-advanced movement ever. The design is inspired by the first models of the Constellation collection, with a “pie-pan” dial and a fluted bezel. Every single Globemaster timepiece is certified through independent tests – a revolutionary method in the watch industry, to be sure. This unique timepiece is also available in the Globemaster Annual Calendar variant, which comes with an integrated annual calendar.

In the men’s collection, we find the 38 or 35mm Constellation Co-Axial models, available in different colors and materials. Another model is the Constellation Day / Date , available in a two-color edition with stainless steel in 18K yellow or red gold or regular stainless steel. In this model, the day of the week is indicated at 12 o’clock, and the date is placed at 6 o’clock. The Omega Constellation Sedna , a limited edition model of the collection, is the first watch made of Sedna 18K gold.
Among the latest models of women ‘s watches from the Constellation collection, we find the Co-Axial in diameters 35mm, 31mm, or 27mm. These are available in a wide variety of colors and materials: from leather to rubber to steel, from red gold to yellow gold to combinations of gold and steel. Omega has also created a Luxury Edition, in which the dials have a precious supernova structure that spreads from the star symbol of Omega. 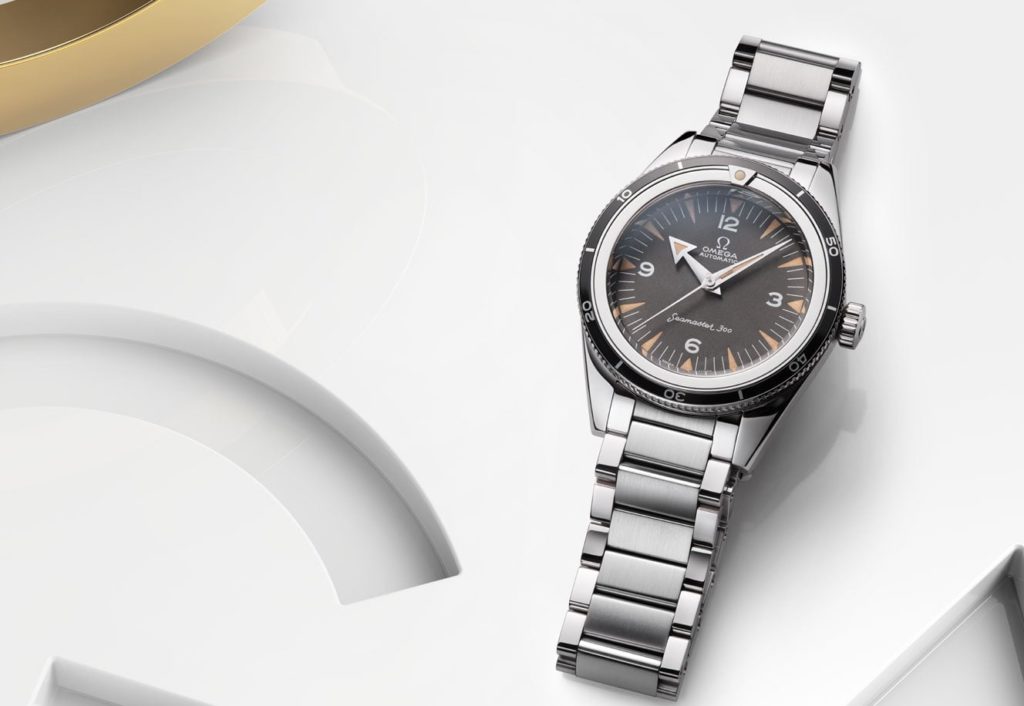 The Omega Seamaster collection , as the name implies, is aimed primarily at clientele interested in watches suitable for water sports and marine depths. Let’s analyze the different models available in this collection. Ready? Let’s take the dive: 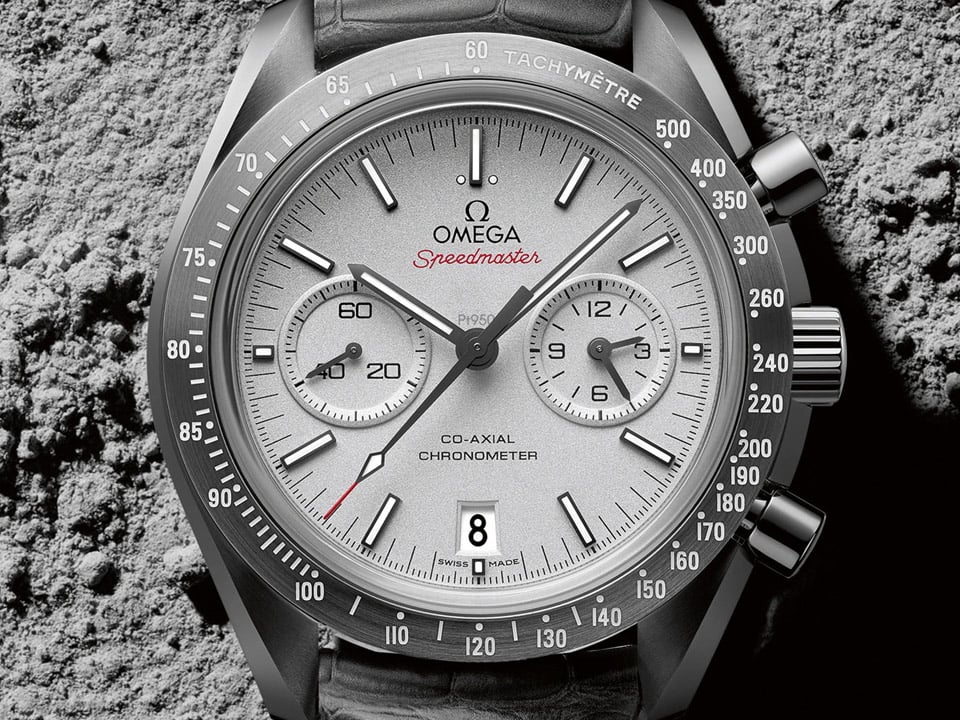 The Omega Speedmaster was one of the watch models tested by NASA for space flight, and was the only one to pass with full marks; thus it became the first watch – and the only, for now – to be worn on the moon. Let’s check out the best models to buy in this collection: 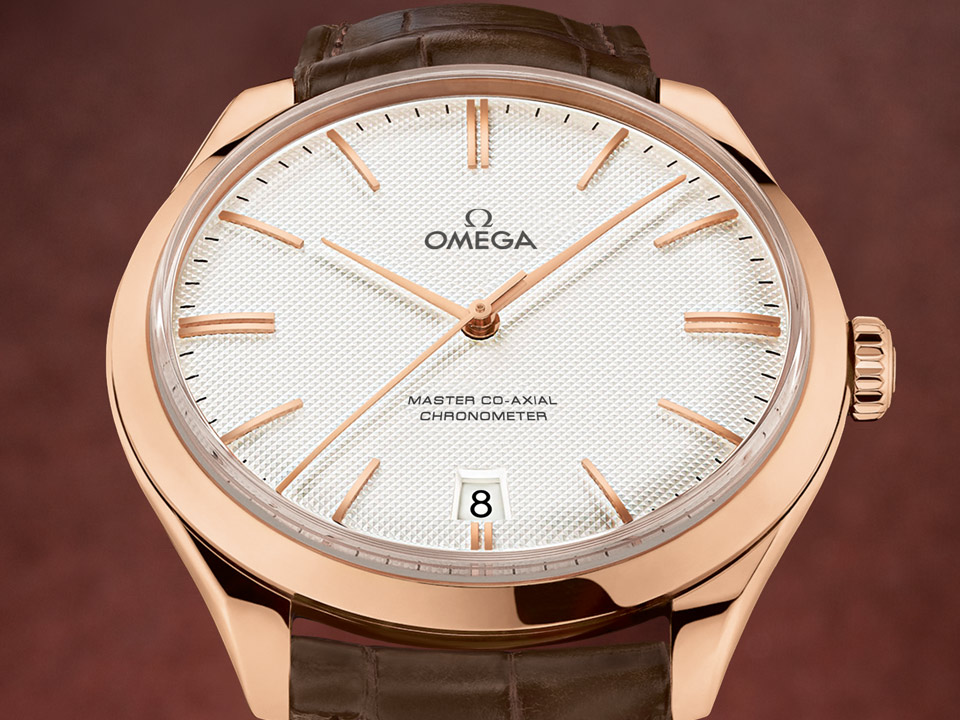 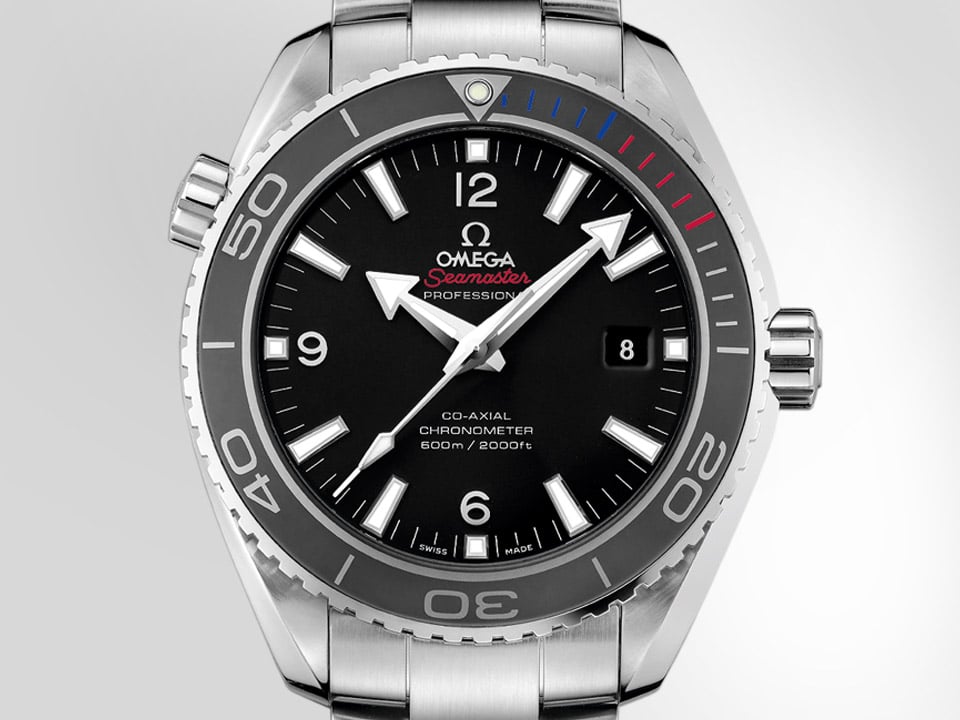 As its name clearly implies, this collection presents special editions – mostly unique reinterpretations of iconic watches and older models from the past. Created in limited series, the timepieces of the Omega Specialties collection have become objects of great value for true watch enthusiasts. Let’s see in detail how this collection is structured:

WHERE TO BUY OMEGA WATCHES

We don’t believe that lovers of watches have an Omega watch in their private collection, whether it is one of the renowned Specialties or a model from one of the other collections. Omega offers models for men and women within each collection, each of which addresses a different personality. So go in search of your favorite model to buy and wear on your wrist! Here are the best shops where you can buy an original Omega watch in total safety, avoiding fakes or replicas:

Clearly, a high-quality watch with a renowned brand behind it has its price. Omega is undoubtedly one of the most well-known – and recognized, given that its watches are the only ones to be described as recognizable from a distance – brands, which is why it is aimed at a high-end audience. A solution implemented by many to make these precious timepieces more affordable is the second-hand purchase. If you know where to look – for example, at watch auctions (in this article we talked about it in detail) – you can indeed find interesting offers. We advise you to always buy in extreme safety, from authorized retailers who are in good standing and can provide an original guarantee, in order to limit the risk of encountering fakes and imitations.

The forerunner of Omega, La Generale Watch Co., was founded in La Chaux-de-Fonds, Switzerland, in 1848 by Louis Brandt, who produced key charging pocket watches from pieces supplied by local artisans. In 1894, his two sons, Louis-Paul and César, developed a revolutionary system of internal production control that allowed the interchangeability of the components.

The watches developed with these techniques were marketed under the Omega brand of La Generale Watch Co. In 1903, the success of the Omega brand led La Generale Watch Co. to launch it as an official company, and that was how Omega Watch Co. was officially founded.
The group continued to grow, multiplying, absorbing, and creating fifty companies, including Lanco and Lemania, producer of the most famous Omega chronograph movements.
In the 1970s, the group had become the leading Swiss watch manufacturer, and the third in the world at large. At the time, the competition for the title “King of Swiss Watches” was fought between Omega and Rolex. Omega watches tended to be more revolutionary and more professional, while Rolex watches were more “evolutionary” and famous for their mechanical parts and their brand.
In the 1970s, the situation changed. It was then that Japanese watchmakers such as Seiko and Citizen achieved dominance thanks to their pioneering quartz movements. In response, Omega tried to compete with Japanese quartz movements manufactured in Switzerland.
Weakened by the severe monetary crisis and recession from 1975 to 1980, the group was taken over by private investors in 1985 and was named SMH, Société de Microélectronique et d’Horlogerie, becoming one of the best watch manufacturers in the world over the next ten years. In 1998, it became the Swatch Group, which now produces Omega and other brands such as Blancpain , Swatch, and Breguet .

Omega has been everywhere: deep in the sea, high in the sky, up to the Moon, on the edge of the world, at the first Olympic Games held in Los Angeles, even on the big screen, on the wrist of the most loved secret agent of all time: 007. The vastness of its history is also linked to its collections, with models for men and women, made in the most disparate materials and in the most varied colors, and with designs that are always different and attractive. As aforementioned, Omega watches are the only ones to be described as recognizable from a distance, and so we will say: Omega watches were the only ones to have written part of the story.

What do you think? Which model do you like or would like to buy? Let us know in the comments below.