In the panorama of luxury watches, one of the most frequently asked questions by fans is this: “Which is the most expensive watch in the world?” Many watches have played this prestigious role, but every year – thanks to the creation of more and more sophisticated models – new records are going to overthrow the previous models. That’s why, today, we want to talk to you about the Graff Diamonds Hallucination, currently the most expensive clock of 2020 and in history, whose cost would make even the most expert of experts pale: 55 million dollars.

Let’s analyze its history, its creator, the materials with which it was made, and the reasons why it is considered the most expensive and precious watch ever.

Most expensive watch in the world 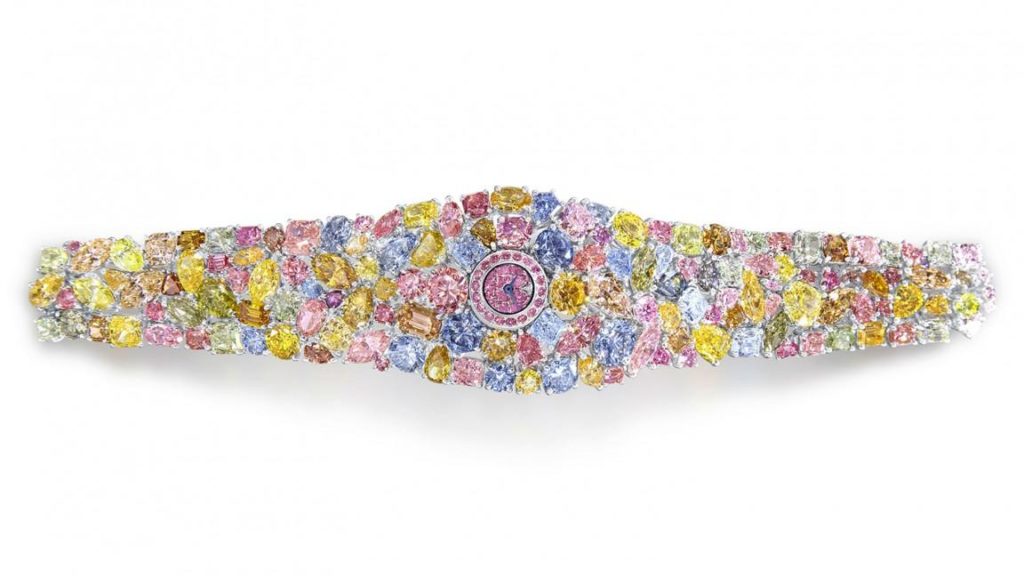 At first glance, the Graff Diamonds Hallucination makes you immediately understand why it costs so much. Contrary to what you might think, however, it is mostly composed of diamonds (110 carats) of various colors and shapes, positioned on a bracelet made of platinum.

The colors of the diamonds are quite varied: yellow, light pink, dark pink, light blue, dark blue, gray, and orange create a truly surprising effect when they are crossed by light, creating infinite color variations.

The shapes of the diamonds are extremely varied as well. The jeweler, Graff, wanted to use diamonds of different shapes such as hearts, pears, emeralds, marquis, and circles, all carved and selected specifically for this sublime wristwatch.

The dial used for signaling the time is very small in diameter; for some, it might even seem obsolete, given that at first glance this model looks more like a jewel than a watch. It is quartz and not mechanical.

The reason for which a quartz mechanism was used probably has to do with the watch’s final purchaser. Indeed, in case you have not yet understood, this model is reserved for the female sex – namely for a classy woman or an heiress who has no problem spending $55 million for such a jewel.

Women prefer shine and diamonds over the mechanical mechanisms favored by men, which is why Graff opted for this design choice.

If you did not recognize this brand by reading the name of the most expensive watch ever, you are probably not aware of the splendid works by Laurence Graff throughout the brand’s history.

Born in London in 1938, Graff had a predilection for jewelry manufacturers early on, starting to work at 16 as a designer of simple jewelry and ring repairer.

With time, he began his climb to success by creating Graff Diamonds , which would become the base from which he founded his own jewelry shops, scattered across the most important cities in the world.

The world’s most expensive watch for men As already mentioned, the Graff Diamonds Hallucination was designed to be worn on a women’s wrist, so one might ask what the most expensive watch for men is.

The Patek Philippe Henry Graves Supercomplication is currently the most expensive men’s watch ever, with a price of $24 million.

Unlike the Graff Diamonds Hallucination, this model is not a wristwatch but pocket-sized – which made for very popular models in the early 1900s.

Made in 18-carat gold, it is considered the most complicated watch ever made. In fact, its 24 complications took more than 3 years to design, and it took 5 more to make it in an era when computers didn’t exist.

Its cost has increased more and more over time, with its peak in 2014, when it was sold for 24 million dollars after being auctioned.

Rolex most expensive watch in the world

When we think of the most expensive luxury watches, the brand that always comes to mind is Rolex. To date, this company is probably the most recognizable watch brand thanks to its prestigious history.

Many watches have played the role of the most expensive Rolex watch over time, but in 2017, a new entry literally detached itself from previous models. We are talking about the Rolex Daytona Paul Newman, a name that comes from its owner, Paul Newman, one of the greatest actors ever; it was auctioned for 17.8 million dollars.

Unlike others, this particular model’s high value comes from not for the quality, but because of the fact that it was worn for a long time by the Hollywood actor. In fact, the actual model was a classic Daytona that all fans could buy at that time by going in an authorized jewelry store. A detail that distinguishes Paul Newman’s watch is the engraving of the words “DRIVE CAREFULLY ME” on the back, specially made by his wife, as Newman was fond of motor racing.

Read Also: The ranking of the 15 most expensive watches

As you may have noticed, the prices of the most expensive watches exceed expectations. These authentic jewels will only continue to increase in value over time. Many other models – whether their value is intrinsic or historic – will be created by master watchmakers in the years to come at similarly or even greater stratospheric prices.

And what do you think? Let us know in the comments below.